[HKAS Seminar] Is Death the End? Senses of Life After Death in Guangdong and Hong Kong


Death poses an ultimate threat to our lives and our sense of security in this world. Life after death has always been a point of concern among people in different parts of the world and various religions and local beliefs offer diverse depictions of what an afterlife is like. This talk explores how individuals in Guangdong and Hong Kong envision what will happen to them after they die. Guangdong, like many other parts of China went through the socialist era when religions and supernatural beliefs and practices were banned. While the atheist education in that period has produced numbers of non-believers in the afterlife and even atheists, many seem to be increasingly interested in this issue since the reform era. Graveyard and related businesses are now heavily invested in. Offerings for the deceased have grown in variety to include the most up-to-date models of cell phones. What do these trends tell us about changes in senses of afterlife among Chinese in recent decades? Compared to Guangdong, people in Hong Kong have enjoyed relative religious freedom, although the government favored Christianity among other religions under the colonial rule. Its historical trajectory gives rise to a different scene in terms of senses of life after death. Based on months of in-depth interviews, this talk addresses individuals’ deepest fears and how they tackle them with or without an imagination of an afterlife.

The lecture is conducted in English. All are welcome. (Space, however, is limited to 139 seats.) 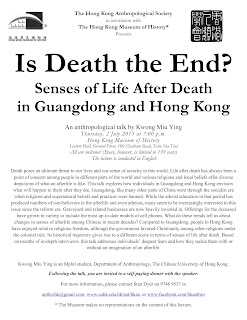 The Institute of Future Cities (IOFC), in collaboration with Hong Kong Discovery, is organizing a fieldtrip to Wolong (臥龍) Sichuan. If you’re interested in post-disaster management, tourism and international development, this is a great opportunity for you to learn more about the recent changes in Wolong since the 2008 Sichuan earthquake.

During this trip, participants will visit the Giant Panda Protection and Research Centre to learn more about environmental conservation and natural resources management. They will explore local farms, villages and temples to understand Wolong’s community, history and culture. More importantly, they will study and discuss more about the 5.12 Earthquake Rehabilitation Project and other development projects. Participants will also see museums, exhibitions, heritage sites and etc.

All students enrolled in the BA Anthropology or BA Cultural Management programmes are welcomed to apply, but preference will be given to senior students. Participants are required to write a post-fieldtrip report, which will be a great chance for them to exchange and learn from each other’s different disciplinary backgrounds and expertise.

Dates: 24th–28th September, 2015 (5-day trip)
Cost: The cost of airfare, local transportation, lodging and food are covered by Hong Kong Discovery. However, participants are required to pay for their own travel insurance package of approx. HK$110.
Eligibility: BA Anthropology or BA Cultural Management students. Priority
will be given to senior applicants.
Deadline: 10th July, 2015 (Fri)

To apply, please visit http://goo.gl/forms/NirOJvNyGx and fill in your personal details, degree name, year, etc. Successful applicants will be notified via email by July 17, 2015 (Fri).

The Department of Anthropology, Chinese University of Hong Kong, invites graduate students in Asia and elsewhere to present their current research at our 8th Postgraduate Student Forum: “Transforming Asian Anthropology: Dialogues and Imaginations”. The Forum, to be held 22-23 January 2016 (Friday and Saturday) at The Chinese University of Hong Kong, will showcase the best of students’ contemporary research on Asia.
Hong Kong is a global city, a major node for trade, transportation, and the exchange of ideas. This Postgraduate Student Forum seeks to encourage the communication among young anthropologists and other social scientists all over the world, to help improve their research and to make the excellent research being conducted in Asia to be better known internationally.

Presentations and Panels
We accept proposals for individual papers only this year. Papers of different topics are welcome, ethnographic work preferred. Papers will then be organized into panels. Each paper presentation will last 15 minutes; PowerPoint and multimedia equipment will be provided. The language of the forum will be English.

How to Apply
Application procedure and additional information can be found at
http://arts.cuhk.edu.hk/~ant/pgforum/
Deadline for abstract is 16 October 2015.


Since 2005, “internet addiction” has been treated as a mental disorder in China. Treatment camps for internet addiction are widely established across China to save Chinese youths and their families. Yet, the media depicts the “dark” side of these unauthorized institutions, and discloses the series of physical tortures suffered by the youngsters being sent to these centres.

Rao Yichen, an MPhil student of our Department, had delivered an anthropological talk* on the topic “Coming of Age with “Internet Addiction”: Institutional Encounters and Subject Formation of Chinese Youngsters” at the Hong Kong Museum of History last Thursday. He conducted three-month ethnographic fieldwork in a treatment camp to find out whether or not the news were doing justice to these institutions, what kinds of treatments, effective or not, the youngsters had received, and how these camps had informed us about Chinese society.

The camp he conducted fieldwork at employed different therapeutics and set up various units—drillmaster team, psychological group, clinical unit, nursing unit, leisure activity group and parents group—to treat the youngsters. Uniformity and discipline were emphasized in the camp, in which the youngsters had to follow a daily schedule, wear military uniform and receive training. Pleasure control had been viewed as the key, since these youngsters were believed to have problem in impulse control. Yichen highlighted the use of Morita therapy (森田療法) in the camp, which was a Japanese therapy designed for patients with obsessive–compulsive disorder. The therapy commonly took a month. At first, the youngster would be isolated in a single room with no one to talk to, and left to his or her own mind. He or she would be given a pen in the second week to write anything, which could be reflections or creative writings. In this treatment, the soul could either be the prison, or the other way round, the savior of the body.

Yichen noted that the youngsters had invented their local currency—the piece of bread distributed after dinner—in the treatment camp which enabled them to exchange and reciprocate. The “bread system” informed social actions and helped the youngsters to establish relationships, hence contributing to the formation of a community in the camp.

The whole treatment required six months for completion. Length of the treatment period was important—the youngsters might attach to the institution if they stayed there too long, or could still be at the stage of conversion if the duration of the treatment was too short.

Yichen concluded that the term “internet addiction” was only meaningful in the context. Different societies had their own ways in controlling the “abnormalities”. What shall not be overlooked was the discourse that subjected youngsters to “internet addiction” in the first place.