About the The Hong Kong PhD Fellowship

The Hong Kong PhD Fellowship Scheme aims to attract the outstanding students in the world to pursue their PhD degree programmes in Hong Kong's institutions.

The Fellowship provides a monthly stipend of HK$20,000 (approximately US$2,600) and a conference and research-related travel allowance of HK$10,000 (approximately US$1,300) per year for a maximum period of three years. For awardees with a normative study period of 4 years, CUHK will offer the award at the same level for the fourth year. Each year, 135 Fellowships are awarded across all disciplines and universities in Hong Kong.


Schmitt, Edwin A., Department of Anthropology

Over the last year the fellowship scheme has been a crucial support for my research and life here in Hong Kong. Moreover they provide us with extra opportunities to promote our research at conferences around the world. I choose Anthropology for my programme of study here at CUHK because of the impact that the field has in improving the livelihoods of others around the world. My hope is that my studies can be beneficial to people inside and outside of academia. Additionally, moving back to Asia was an easy decision for me because of the high-caliber research being done here at CUHK as well as providing me an institution which is closer to my fieldsite. It is a relief to be able to visit my friends and family in Sichuan multiple times a year.  Without the financial support from the HK Ph.D. Fellowship Scheme none of this would have been possible.

For more information of application, please visit http://www2.cuhk.edu.hk/gss/hkphd or contact the department at anthropology@cuhk.edu.hk 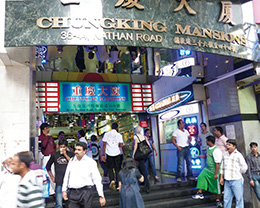 Chungking Mansions is a building full of cheap guesthouses, restaurants, and wholesale businesses located in the heart of Hong Kong’s tourist district of Tsim Sha Tsui. It is where traders, merchants, temporary workers, and asylum seekers from South Asia and sub-Saharan Africa come to seek their fortunes. In this research, I sought to understand the people in Chungking Mansions: how exactly they make their livings and comprehend their lives. This was pursued through extended ethnographic research, living in Chungking Mansions for 250 nights over four years, interacting with and interviewing its residents, and accompanying traders and merchants to China, India, and Africa to learn about the global context of their trades and lives.

I found that Chungking Mansions serves as a central hub of what I term ‘low-end globalization’. This is the globalization of cheap, often copy goods smuggled across borders, largely under the radar of states and laws; this is globalization as experienced by most of the world’s people. I estimate, on the basis of extensive interactions with merchants, that 20% of the mobile phones in sub-Saharan Africa have passed through Chungking Mansions. The building exists as a hub of low-end globalization because, due to Hong Kong’s flexible visa policies, it serves as an intermediary between South China manufacturers and developing-world entrepreneurs. South China, with its massive production of cheap goods, plays an essential role in spreading the fruits of globalization to South Asia and sub-Saharan Africa, areas that otherwise would not be able to experience globalization; Chungking Mansions, under Hong Kong’s neoliberal rule of law, facilitates this process.

I also found out much about all the other kinds of people in the building, including asylum seekers, who provide the building with its intellectuals as well as its cheapest labor; Pakistani merchants, who may have lived in Hong Kong for generations; Indian temporary workers flying back and forth between Hong Kong and Kolkata every 42 days, carrying goods to finance their journeys; tourists from all over the world staying in the building’s guesthouses; Indian and African sex workers plying their trade and dreaming of becoming middle-class; and Nepalese heroin addicts surrendering their families’ dreams. All these people play key roles in Chungking Mansions’ low-end globalization.

The primary result of this research is a book explicating Chungking Mansions through the anthropological lens of globalization, Ghetto at the Center of the World: Chungking Mansions, Hong Kong (The University of Chicago Press, 2011). This book depicts the building, the people in it, the goods that pass through it, the laws that constrain it, and what it can tell us about the world’s future. Chungking Mansions will eventually vanish, but our increasingly borderless world will become more and more like Chungking Mansions, the book predicts. My research on Chungking Mansions has been profiled in Time Magazine, BBC, CNN, and the Financial Times; the Ghetto at the Center of the World book has been favorably reviewed in the Wall Street Journal, The Economist, the Los Angeles Review of Books, and the Times Literary Supplement, among other newspapers and magazines, and is now being translated into several languages.