Leo Pang is currently a PhD candidate in the Department of Anthropology at SOAS (The School of Oriental and African Studies), University of London. This talk is based on his PhD thesis research.

Following the talk, you are invited to a self-paying dinner with the speaker. 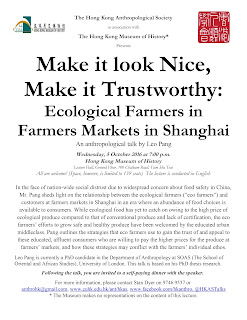 Deby Babis is a sociologist and anthropologist specializing in voluntary organizations and ethnic communities. Her research covers both immigrant and indigenous groups in different countries, such as Argentina, Israel, Bolivia, Canada and the Philippines. Since 2013 she is primarily studying Filipino migrants in Israel and Canada. By means of traditional and digital ethnographies, she explores different aspects of these communities, such as their voluntary organizations, their activities in Facebook and the emergence of mixed families. Deby is a fellow researcher at the Harry S. Truman Research Institute for the Advancement of Peace at The Hebrew University of Jerusalem. 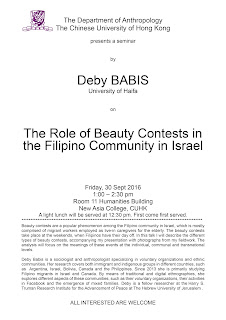 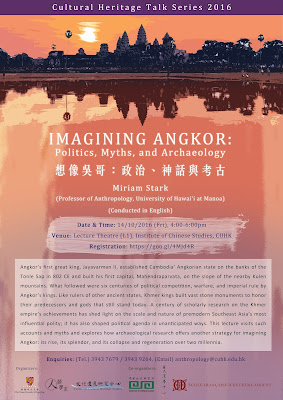 On 20 August 2016, the MIA Workshop organized its sixth seminar. The topic was Bangladeshi food culture and gender issues. Ms. Sabina Sultana, a Bangladeshi nutritionist and medical interpreter, was the speaker.

Ms. Sultana introduced to us that pitha, a cake-like snack, is common in Bangladesh as well as West Bengal in India. It is made from a batter of rice or wheat flour, and filled with sweet or savoury ingredients such as grated coconuts or gurh (condensed cane-sugar). It can be either steamed or fried. Ms. Sultana also told us that ilish is the national fish of Bangladesh, and it is popular in daily meals and festivals alike.

Although there is no Bangladeshi grocery store in Hong Kong, Ms. Sultana said Bangladeshis get almost everything they need from other South Asian supplies stores and supermarkets. Those items that could not be found in Hong Kong, such as specific rice and vegetables, are brought by relatives or friends from Bangladesh occasionally. She mentioned that the eating habits of her family has been influenced by the Chinese cuisines since moving to Hong Kong nine years ago. For instance, they love to cook with vinegar now, which was very rare in the past.

During the short break, Workshop participants got a chance to taste some Bangladeshi food including a vegetable salad, dal puri (a fried puff bread with mung bean), piazu (a deep-fried snack made with lentils), chicken curry, ruhi (fish) curry, rice, and masala tea, all prepared by a home chef.

In the second part of the seminar, Ms. Sultana explained to us the gender situation in Bangladesh. She said Bangladeshi women still suffer as an underprivileged group in terms of health services, education, and employment. For instance, there is a big gender earning gap in Bangladesh. According to Ms. Sultana, women only earns USD 0.12 per day, compare to USD 1 earned by man. In terms of politics, the Bangladeshi government is trying to engage more women in the political system such as reserving 50 seats for women in the Parliament. However, Ms. Sultana commented that the process for improving gender inequality is slow because of the lack of rule of law and corruptions in the government.

Lastly, Ms. Sultana pointed out that Islam teachings consider men and women equal and they will receive fair judgements from Allah. Besides, some may question why Muslim men are allowed to marry a maximum of four wives. Ms. Sultana explained that according to the Quran this is only allowed when the men can treat the wives justly and equally. And often people misunderstood and/or abused this teaching. She reminded us that we should consult the Iman or visit the mosques to learn the truth of Islam.
0 comments

[Publication] Wishing Well: Voices from Foreign Domestic Workers in Hong Kong and Beyond


The book Wishing Well: Voices from Foreign Domestic Workers in Hong Kong and Beyond, co-edited by Dr. Ju-chen Chen and Min Lee, is now available online.

Wishing Well is a collection of poems, essays and fiction written by migrant domestic workers. Published by HelperChoice, it is an open access book free for everyone to read.

Dr. Chen hopes that the book can help to convey the voices of foreign domestic workers to the mainstream society, so that non-domestic-worker readers can get to know more about the worlds of the domestic workers.

Link to the eBook: https://issuu.com/helperchoice/docs/wishing_well_domestic_workers. 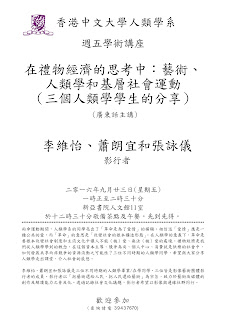 
The Friday seminars schedule of this semester has been announced! Don't forget to mark down the seminar dates on your calendar!

We look forward to seeing you at the seminars!

On 13 August 2016, Mr. Syed Ekram Elahi, President of the Bangladesh Association of Hong Kong (BAHK), was invited to give a talk on the religions and social life of Bangladeshis in Hong Kong.

According to Mr. Syed, most Bangladeshis in Hong Kong are Muslims, with a few Hindu and Buddhist families. Various Islamic and Hindu festivals are observed by the Bangladeshi community in Hong Kong.

In the Eid al-Fitr (Festival of breaking of the fast), Bangladeshi Muslims will gather at mosques for morning prayer, and then visit each other’s homes. People will say “Eid Mubarak”, to greet each other, which means “To wish you a happy Eid”, and it is a custom to hug each other one to three times.

Eid al-Adha (Festival of the Sacrifice) is another important festival observed by Bangladeshi Muslims in Hong Kong. Animals such as cows and goats are sacrificed and distributed to relatives and people in need. In Bangladesh, there are cattle markets in every village, while in Hong Kong, they usually buy cows and goats from the Sheung Shui Slaughterhouse.

Durga Puja, a Hindu festival of Bengali origin, is jointly celebrated by Bangladeshi Hindus and the West Bengalis from India.  It is organized at Henry G. Leong Community Centre in Yau Ma Tei every year.

In terms of social life, Mr. Syed told us that the family structure in Bangladesh has changed from joint family to nuclear family. Most people opt to live with their parents rather than to live individually. Although arranged marriage is still common in Bangladesh, the role of parents has changed from making decisions to giving advice. According to Mr. Syed, Bangladeshi men usually get married at the age of 28, while women get married at the age of 22 to 25. Gaye holud is a ceremony observed in the Bengali wedding. Henna and turmeric paste are applied to the bride and groom respectively as a form of blessing.

As told by Mr. Syed, it is hard to conclude the marriage pattern of the second generation in Hong Kong as most youth have not reached marriage age yet. However, he believed that most of them will organize wedding activities in Bangladesh because the family’s social networks are there. It is also expected that intercultural marriage will be more popular among Bangladeshi youth who grow up in Hong Kong.
1 comments

Apart from the Minor in Cultural Heritage Studies program, our department now has a new minor program that Anthropology majors can take! The Minor in Archaeology program, coordinated by the Department of Anthropology, provides students an option to develop an integrated focus on archaeology by bringing together various perspectives including anthropology, culture management, fine arts, geography and geology, and history. Students will learn about the preservation and management of archaeological sites and excavated objects, and relevant data such as in art and historical studies.

While there is growing awareness about the significance of archaeological discoveries in Hong Kong and the rest of East Asia, systematic training is lacking locally. This minor programme is the first and only programme in Hong Kong that teaches students basic skills in archaeological excavation and research, as well as knowledge in the appreciation, curation, and exhibition of archaeological materials. The programme will connect students with Archaeology programmes in Mainland China and overseas, to expand their perspectives beyond Hong Kong.

In light of increasing admission figures to archaeological exhibitions, students will find themselves equipped for culture-related careers, especially in archaeological excavations, museums, education, and cultural tourism.

Detailed information can be found at www.cuhk.edu.hk/ant/arcan.html. 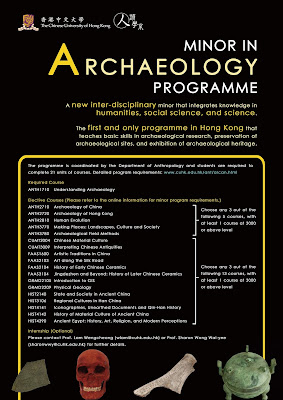