We are thrilled to inform you all that the online information kit has been launched on our department website. If you are interested in Indian culture or the workshop, click here to read more now!
1 comments

Event: Exhibition of the Summer Field Trip to Doulan and Chihshang in Taitung, Taiwan 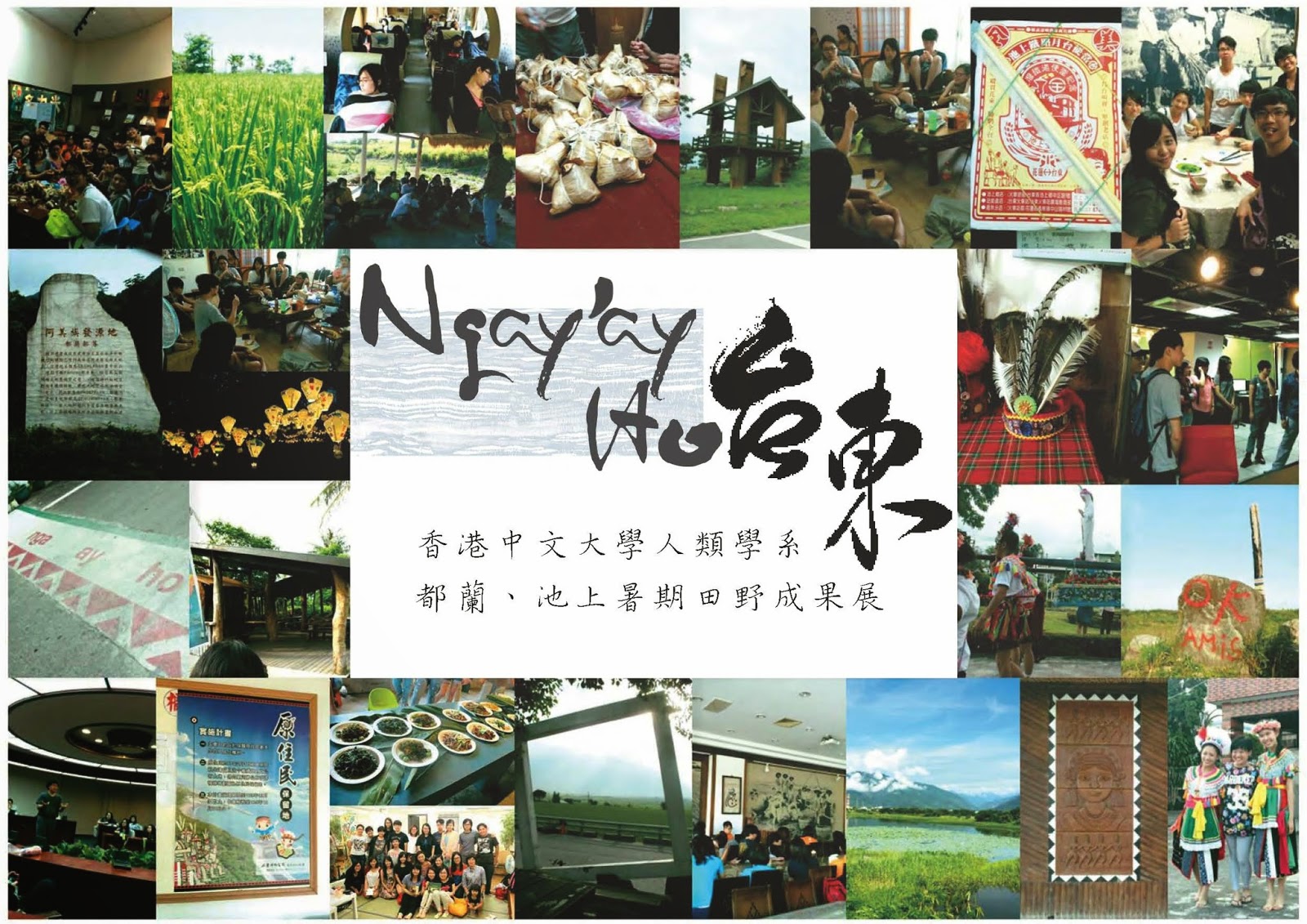 As mentioned in the earlier blogpost, the students who joined the department summer field trip this year demonstrated their learning outcomes by setting up an exhibition in October. The exhibition involved a holistic point of view of the culture and society of Taitung, including the perspectives of agriculture, landscape and aborigines. It was also hoped to reflect the impacts brought by economic development, urbanization and natural environment to the cultural group.

The Opening Ceremony was held on October 13, 2014. Teachers, postgraduate and undergraduate students were invited to join the ceremony. The ceremony started with the welcoming speech from our department chairmen Prof. Gordon Mathews. After Dr. Ju-chen Chen and student representative Eugene Lee introduced the exhibition and the summer field trip this year, all guests started to watch the exhibition while enjoying the refreshment prepared by the students.

The Chinese influence is usually portrayed as a straightforward case of one-way cultural diffusion. In this hypothesis, China was considered as the origin of Khmer ceramics, and Khmer ceramics and kiln technology could not have reversely influenced China. The Khmer craftsmen received their knowledge through Chinese potters and imported Chinese trade ceramics.
Another hypothesis suggests the Khmers’ ceramics invention is parallel to Chinese ceramics industries. In this hypothesis, Khmer ceramics was indigenous, unique, continual inventiveness, and dis-similar to other Southeast Asian ceramics in the region. The hypothesis is heavily relied on archaeological evidences from controlled excavations, which obtain new information on minimizing all Chinese elements in Khmer ceramics.

Professor Wong argued that, according to several shortcomings associated with the methodologies and sources adopted by the various scholars, these hypotheses ignored the complexity of cultural contacts between different ceramics industries. Both Khmer and Chinese ceramics industries played active roles. They absorbed and selected the foreign elements that suit their own needs.
As the excavation, fieldwork and research of this project is still ongoing, Professor Wong suggested more archaeological findings are needed before making any conclusion. She also encouraged us to think about the social and ideological context of the diffusion, for example, whether the Khmer Empire should be considered as the great dominated empire from 9th to 14th centuries or the periphery region of China.
0 comments

Prof. Daromir Rudnyckyj, an anthropologist at the University of Victory (BC, Canada), is visiting Hong Kong and came for an informal discussion today in NAH 401. Prof. Joseph Bosco, Dr. Paul James O'Connor and the postgraduate students joined the discussion.

Tihar is the second biggest festival for the Hindus in Nepal. Some may call it the Nepali version of Diwali, as they both share the same dates on the Hindu calendar. It refers to a five-day celebration, with different targets of worship and purposes on each day.

Participants of the Nepali Culture Workshop visited a Nepali household in Jordan to observe the celebration on the 5th day of Tihar, the Bhai Tika (Brother Blessing). It is the day in a year when sisters worship their brothers, and receive blessings from them. There is a mythology behind the festival. A girl, Jamuna, whose beloved brother is mortally ill, makes a deal with Yama, the God of Death. She asks Yama to promise to only take her brother’s soul when her offerings of grass and flowers wilt, and the water used to draw the boundary becomes dry. Yama agrees, and each time he sends his messenger to check on Jamuna’s complicated worship, the messenger fails to bring back the brother’s soul. Yama finally gives up, and Jamuna’s brother is saved.

As a celebration of the sister’s love for her brother, Tihar has an important ritual in which the sister draws a tika on the brother’s forehead with with rice flour mixture, topped with different colors to represent different blessings. The tika symbolizes protection of the chakra, thus preventing Yama, the God of Death, from taking the soul. The sister would then present the brother with gifts such as a marigold garland, a Nepali hat, and a tray of sweets and fruits. After the worship, the brothers would pay respect to the sister and return her with a gift of money. Raima showed us two ways of doing the tika—one vertical and the other circular, and explained the meanings of each step of the ritual. A sumptuous meal then followed, and everyone enjoyed great Nepali dishes.

Workshop participants then attended a talk by Dr. Wyman Tang, in a Nepali restaurant in Jordan. Dr. Tang introduced some popular religious beliefs among the Nepalis. According to his research, the number of Christians is increasing, though Tibetan Buddhism and Hinduism are still the dominant religions. Yet, as he explained, being a Nepali Christian was not easy, as the older generation may not endorse this religious choice. Dr. Tang also explained the caste system of the Nepalis, which is different from the caste system in India. While the influence of the caste system has lessened, it still exerts a great influence on different aspects of Nepali daily life, including the marriage system.
0 comments

Every summer, our department organizes a field trip for students to deepen their understanding of anthropology. The fieldsites cover a wide range of countries and cultural backgrounds. This year, Dr. Ju-chen Chen led a trip to Doulan and Chihshang in Taitung, Taiwan. The field trip focused on (1) Organic agriculture and the environment, (2) Aborigines and the tribal culture, and (3) Colonialization culture and the protection, management and manipulation of the natural landscape in Taitung. The students were given an opportunity to visit the tribes and farms, to interact with the stake holders, and to have deeper understanding of how the economic development, urbanization and natural environment influence the culture.

Undergraduate students of the Department of Anthropology are encouraged to apply for internship opportunities at institutions/organizations both locally and internationally every summer, as internship allows students to explore their interest and provides invaluable field experience.

In the year 2014, the Department has secured 5 summer internship opportunities for students – 1 overseas and 4 local.  Students who have participated have written to share their experience as interns in the Nicholson Museum (Antiquities) in The University of Sydney (Australia), the Hong Kong Museum of History, the Hong Kong Maritime Museum and the Antiquities and Monuments Office (Hong Kong).

For more information on the summer internship and to find out what our students have to share, please visit our website.
For students who are interested in applying internship in the coming year, you may also visit the Career Planning and Development Centre, Office of Student Affair's website for the Global Internship Programme.

A discussion panel on education for Nepalis in Hong Kong was held on October 11, 2014. Dr. Chee Wai-Chee, Dr. Rizman Ullah, and Mrs. Raima Shah made a presentation from their experiences and research on education issues in Hong Kong.

Dr. Chee’s presentation focused on three aspects of the education for ethnic minorities in Hong Kong—challenges, opportunities, and transitions. According to the Population Census 2011, ethnic minorities made up 6.4% of the total population in Hong Kong. Studies estimated that only 10% of the ethnic minority youth would go on to post-secondary education. With little chance of receiving higher education, Nepalis consisted 42.3% of the labor force in elementary occupations.

Dr. Chee pointed out that the challenges for ethnic students are structural. These included the 3-band school ranking, the education policy of biliteracy and trilingualism, and the lack of parental support in learning. For opportunities, Dr. Chee mentioned the Education Department’s plan to promote Chinese as a Second Language, and the decline of birth rate which has made ethnic minority student   an important source of student intake for less competitive schools. In her research she found that both parents and children have high aspirations for the future.

Dr. Ullah explained how multiculturalism was linked to pluralism and equality. Sharing his own upbringing in Hong Kong, he found that minority groups often were victims of stereotypes and prejudices.According to Dr. Ullah’s research,  the official curriculum has failed  the minority students.


Mrs. Shah was born in Hong Kong as a daughter of a Gurkha soldier. She went to school inside the Gurkha camp, which followed the curriculum in Nepal. After the Handover students were forced to switch to the local curriculum. She remembered she had Nepali teachers from Nepal, and they were able to celebrate all the traditional Nepali festivals in school before the Handover. Evenly so, she did not think she understood Nepali culture completely. Yet, she felt grateful for the Hong Kong Government for giving equal education opportunity to all, at least in the kindergarten sector. In her daily experience as a kindergarten teacher, a lot of ethnic minority parents wanted to teach their children Chinese, but they lacked Cantonese proficiency themselves. She noticed a significant rise in Nepali students in her kindergarten since she started to work there, because the parents preferred teachers who understood their culture and wereable to communicate with them.
0 comments