[Announcement] New courses offered by the Department of Anthropology


The Department of Anthropology will be offering five new courses in the coming academic year―three in the fall semester and two in the spring semester. 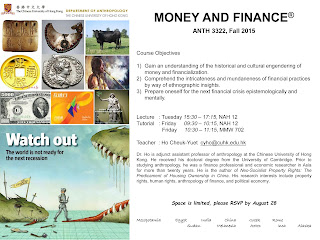 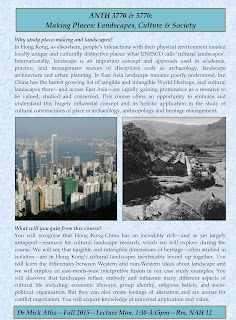 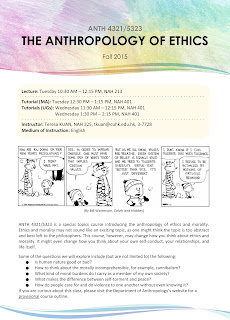 ANTH3321 Topics in Anthropology: Anthropology of Gender and the Law / Prof. Sealing Cheng

Quota is limited. Interested students remember to register for the courses in August 2015 (course registration dates)!

Is Death the End? Senses of Life after Death in Guangdong

Death appears to be the ultimate threat to our lives and senses of security. People in different parts of the world, with different religions and local beliefs, offer diverse depictions of an afterlife. On July 2, the Hong Kong Anthropological Society had invited Allie Kwong, an MPhil student of our department, to give a talk on “Is Death the End? Senses of Life after Death in Guangdong”. Allie has been doing research on the topic and had interviewed people in Guangdong to see how they envisioned their lives after death, in what contexts their imaginations were situated, and how their senses of life after death related to their understanding of life.

Allie’s informants included believers, agnostics and non-believers of life after death. Use of specific terms and concepts by non-believers revealed the forces that shaped their non-belief. These forces included the materialist and atheist education in the socialist era, the celebration of science and hierarchy created between science and “superstition”. Beliefs in life after death was considered and “superstition” by many. It was associated with the rural population and negative traits such as being “uncultured” and “uneducated”. For the believers of an afterlife, rather than adhering to a single doctrine, they constructed their own version of life after death by selecting different themes from available resources. Allie identified two conditions that encouraged such process of personalization and privatization. First, the religious policy in the reform era created a hierarchical plurality in the religious field. A diversity of religious views have been allowed for choice in contemporary China. Second, the stigma that supernatural beliefs continued to carry contributed to the privatization of beliefs in life after death.

Allie argued that there are relationships between senses of life after death and how individuals understand or lives their life. First, senses of life after death influences individuals’ lives. Beliefs in reincarnation, paradise and hell, and heaven and hell provided believers moral guidance and motivated believers to perform good deeds, while beliefs in spirits inflicted emotions and influenced decision making of the believers by supernatural agents’ direct participation in believers’ life. Non-believers spoke of the moral freedom that non-belief granted, which allowed them to be more “practical” and “flexible”. Second, individuals’ senses of life after death may be a reflection of their emotional bonding with the deceased. In turn, the imagination/belief of afterlife or its absence help them make sense of their feelings towards the deceased, how they should position themselves in the relationship and how they should proceed with life. Finally, senses of life after death becomes a means through which people imagine a better China, one that is morally regulated as they feel that today is not.. A number of interviewees, believers and non-believers believed that if more people in China believed in reincarnation or heaven and hell, China would become a better place. Allie argued that this statement, unsupported empirically, had to be understood as a response to the “moral vacuum” resulted from the end of a single dominant code of ethics and the emergence of heterogeneous values since the fall of the communist ideal.

Around 40 people attended the talk and audience showed great interest in the topic. They raised questions about symbolic immortality through descendants and nationalism, the differences between Guangzhou and Hong Kong people in their attitudes towards life after death, the social and economic pattern of believers and non-believers, and how the research influences the researcher in return. The discussion was lively and engaging. In short, Allie’s talk addressed the deepest fears of individuals in Guangdong and discussed how societal values and individuals’ senses of lives influenced each other. Individuals’ imaginations reflected their pursuits in life, their attitude to life, and the social values they internalized.
1 comments

[Virtual Museum] Religion and the material culture of luck

The Virtual Museum at the Department of Anthropology, CUHK, offers the public a digital exhibition of ethnographic collections and archaeological artifacts collected by the teachers and students of the Department over the last three decades. Theme of current exhibition is "Religion and the material culture of luck". To view more displayed exhibits, please visit the website of Virtual Museum.


Religion and the material culture of luck

Anthropologists study the influence of religion on social organization and examine how religion, through the use of symbols and meanings, creates powerful emotion and maintains solidarity among believers. Religion can be regarded as a socio-cultural construct, which provides common values and gives meaning to people's life. Anthropologists are not concerned with the truth of religion; rather, they investigate the role of religion in people's life.

Luck is perceived as something that is outside human control, which may affect one's life favorably or unfavorably. Luck has often been associated with religious faith. Objects that "receive the blessing of deities" are often believed to have the power to protect believers and bring them good luck. Therefore, many people are willing to make acts of devotion and pay for these kinds of sacred objects.

Blessings of deities are materialized as objects of luck. Lucky charms, amulets and key chains are some of the examples. In Taiwan and Hong Kong, Tianhou (also known as Mazu and Tin Hau) is widely worshipped by fisherfolk who believe that she can ensure their safety. Temples to Tianhou often sell or give out various objects of luck that can protect the believers and bring them fortune. Guanyin is also a popular deity worshipped in China and Southeast Asia. It is believed that Guanyin has mercy over people and will save them from pain. Luck also has a significant role to play in everyday life in contemporary Japan. Many Japanese people purchase engimono (lucky things that are associated with the blessings of deities) or pay visit to shrines and temples at the start of New Year to pray for good fortune.

Some sacred objects, such as "blessing rice" (literally "rice that brings safety"), have blurred the distinction between their use and symbolic value. This reflects the contradiction between the materiality of common objects used in everyday life and the spiritual value embedded in these things that can be constructed by consecration or circulation.
1 comments