Our students and teachers voted to select the best three presentations among the 27 interesting presentations. This year the first prize went to Cheung Shuk Ching Salina, who worked on the topic “Volunteer Work―Who Does It Really Help?” The second and third prizes were respectively awarded to Yuen Ka Sin Claudia for her project entitled “Rethinking “Helping Others”: Homelessness & Youth Activism” and Lam Ka Ki Kiki for her project “A comparative study of university museum, the Nicholson Museum of the University of Sydney and the Art Museum of the Chinese University of Hong Kong”.


"Internet addiction" has been treated as a mental disorder in China since 2005. The past ten years have witnessed the rise and fall of a national campaign to "rescue" the 24 million "Internet addicts" in China. Some of them sat in an internet café for days or weeks without eating or drinking. Some committed suicide as a result of one quarrel after another with their parents. Some killed their parents as they "lost their sense" in the world on-line. Treatment camps for internet addiction were established across China under the mission of saving Chinese youths and their families. However, the media coverage of these institutions "disclosed" their "dark" and disruptive sides. Young people sent to these centers were said to have gone through a series of physical tortures - some were even trained to death. Based on three months' ethnographic fieldwork in a treatment camp based on different therapeutics, this talk gives an inquiry into the discipline and resistance, the institutional encounters and the subject formations of the youngsters who underwent the treatment of "internet addiction".
The lecture is conducted in English. All are welcome. (Space, however, is limited to 139 seats.) 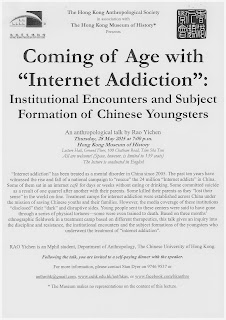 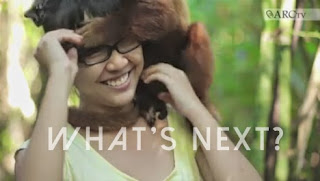 Conversations with Anthropologists―What is anthropology?

People who study anthropology may have answered this question time and again―What is anthropology? Dr. Gerhard Hoffstaedter, a lecturer in anthropology in the School of Social Science at The University of Queensland, had talked to different anthropologists and asked their definitions towards the subject in the first lecture of his open online course “World101x Anthropology of Current World Issues”.

Dr. Hoffstaedter, in the opening of the video, says, “The best way to start defining anthropology is perhaps by what it's not. We are not, unfortunately, Indiana Jones-like figures finding treasures in cowboy hats with whips attached… We're also not generally concerned with dinosaurs and leave that for the paleontologists. Nor do we study insects. That's for the entomologists. Social or cultural anthropology is about people: the environments they inhabit and the things they get up to.”

Other anthropologists also give inspiring definitions towards anthropology. Daniel Goldstein, a Professor in the Department of Anthropology at the Rutgers University, defines anthropology in this way, “It's not about lab work, at least not the kind of anthropology that I do. It's not about quantification, numbers and formulas and things. It's about going out into the world and talking to people and meeting them as equals and getting to understand their lives and their worlds through the perspective of people living those lives. That was fascinating to me when I was 19, and it still is today.”

Sarah Kendzior, a coloumnist of Al Jazeera, talks about anthropology in this way, which is indeed very true, “You can go in with your own research question, and you'll often end up, as an anthropologist, in a completely different direction because you're following the lead of the people you're talking to. You're finding out what matters to them, what's important to them.”

Watch the video to see how other anthropologists define anthropology. (You may view the subtitle by adjusting the setting of the video.)

[Publication] 公路上的人類學家 Anthropologists on the Road

書名：公路上的人類學家
編者：張展鴻 、駱吉婷
簡介：
「公路」，本來是連貫兩地的基建工程。
公路的旅程上，經常出現無法預期的「故事」，而其中的戲劇性情節不僅是社會萬花筒，更展示了人生無常和人事多變的情和境。因此「公路」也成為電影故事的敍事技巧，強調自我的探索和反思。
本書借用了「公路上」一詞來呈現一群從事人類學的年青學者和研究生在走過當下中國社會田野時的觀察和感受。他們從事研究的漫長歲月裏，和每個香港市民一樣，不單有成功的經驗，也有失敗的教訓，他們在奔馳過的公路旅程中留下段段心路歷程，把遊走在田野的機遇、探索和融會等經驗與大家分享。
詳情: http://platform.hkdiscovery.com/?p=40761
***************************************************************
Professor Sidney Cheung's new edited book Anthropologists on the Road, published by Hong Kong Discovery, can now be purchased in various magazine/book outlets. The book, written in Chinese with English translation, retells the observations and experiences of anthropologists (many of which are our teachers/students) doing fieldwork in China. Retail price of the book is HK$58.
Title: Anthropologists on the Road
Editors: Sidney C. H. Cheung and Luo Jiting
Introduction:
A Road is an infrastructure that connects one place to another.
Anything can happen in a long road journey – every story tells something about society, and altogether they weave lives between individuals. For this, “road movie” is a popular film genre that stresses self-exploration and rethinking.
Taking the spirit of the “road”, this book retells observations and reflections after a group of fresh anthropology researchers and postgraduates walked through the fields of contemporary China. It’s been time that they began their journey of research and, just as any ordinary citizen of Hong Kong, have come through successes and failures. Miles and miles there are stories that touch their hearts, which they would really like to share with the readers along with their other experiences on the road.
Detail: http://platform.hkdiscovery.com/?p=40761
0 comments