Zones, Landmarks and Spatialized Conflict in a NE Tibetan Town

On 7 Oct 2016, our department invited Dr. Mark Stevenson to give a talk on “Zones, Landmarks and Spatialized Conflict in a NE Tibetan Town”. His talk examined inter-ethnic relations through the lens of the making of public space in Rebkong. Given the fact that Xining, the capital of Qinghai province locates in the northern direction of this village, the government thus seems to identify the north part of the village as newer and more secular space, whereas the south of it as older and more religious (as the monastery is located in the south).

Many pictures showed during the talk spoke for themselves regarding the topic. One picture, with a statue of Tibetan Buddha standing in the local public square and with a few Tibetans kowtowed to the Buda, showed how recent a product the public space is for the locals. The speaker mentioned that there was no public square in Xining as well until around 2000. This might indicate some less-recognized inner struggle. The fact that this statue was sponsored by the government of Tianjin added even more complexity to the story. As many young Tibetans get their education in big cities such as Beijing and Shanghai, Tianjin is the one which embraced the largest number of Tibetan students from this town, which justifies its sponsorship. Another picture shows a group of young local Tibetan students protesting for their right of being educated in Tibetan language right by the said square. A third picture shows how the village, due to its famous Thangka artifact, is going to be designed by the government as a “development garden for art and artists” (青海熱貢藝術工業園區) which will probably attract more investment and opportunity for the locals, and at the same time, shape the cultural landscape of the valley in a profound way. 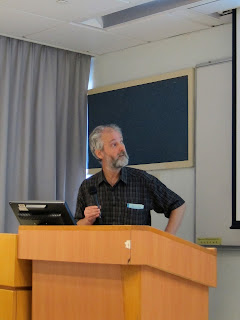 The speaker mentioned about the connection between public space and the Tibetan protest happened in 2008 as well as the public suicides of the same group happened around 2009 and 2010. Due to the public nature of the square, these suicides may be considered public events involving witnesses. The creation of new public space (such as the one with statue) means it can be used by protesters, for whom the public witness is desired. For example, the picture of protest in the square was immediately uploaded to internet during the very time and got circulated very soon. Moreover, the speaker also said that a contest for power/authority has existed between the secular and the administrative force, which can be seen from the choosing of local religious head. As “no religion in Tibet does not have a government behind it”, it is for sure that neither side can be cut clear from the other; the “connection”, as opposed to the “division” of the two, thus deserves equal attention of the investigator.

News about the global plight of refugees has become commonplace in our newspapers with over 65 million people forcibly displaced as a result of on-going conflict and persecution around the world. In Hong Kong, the number of refugees (and asylum seekers, potential victims of trafficking, etc.) stands at 11,000—a negligible fraction of the population and a mere 2% increase in numbers over the last 6 months—yet the Immigration Department has come to describe it as a “worsening influx” and a “surge”. Politicians and certain media channels have similarly adopted negative stereotyping of refugees in their election campaigns and coverage, and potentially unlawful (and dangerous) options have been presented as solutions to this “crisis”. This talk presents an overview of the change in institutional rhetoric regarding refugees and opens discussion on its influence on the lives of an already marginalized community in Hong Kong.

Justin Murgai is an M.Phil graduate of the Department of Anthropology at the Chinese University of Hong Kong. He is now Manager, Christian Action - Humanitarian Services (Hong Kong). 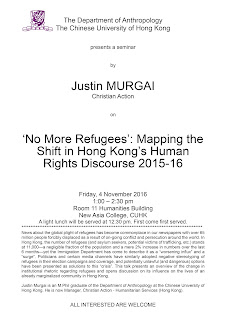 The Department of Anthropology, The Chinese University of Hong Kong will hold a roundtable discussion on “Low-End Globalization on Three Continents” next Tuesday! All interested are welcome!

Juliane Müller, Ludwig-Maximilians-Universitat Munchen, Germany
“Popular trade in Bolivia and the Andes in relation to China”

Each speaker will speak for ten minutes. Then, speakers and audience members will question each other, to try to arrive at some deeper insights into the processes of low-end globalization worldwide.
0 comments

Every year, the Anthropology Department organizes a field trip to give majors a chance to gain experience conducting fieldwork in another culture. This year, students did fieldwork on tradition and change in wedding rituals in Pingdong, southern Taiwan. This exhibition shows how wedding rituals have changed over time, and also illustrates how anthropologists can study a simple custom to learn more about a society and culture more broadly.

Opening Ceremony:
12:00 noon, 18 October 2016
(All are welcome! Light refreshments will be served in the opening ceremony.)

The Role of Beauty Contests in the Filipino Community in Israel

On Sept 30, our department invited Deby Babis, a sociologist and anthropologist specializing in voluntary organizations and ethnic communities, to give a talk on the role of beauty contests in the Filipino community in Israel. Babis first gave the audience some background information about Israel and the Filipino workers working in the country. The population of Israel was approximately 8,500,000, among which Jews constituted the largest population group and Arabs formed the second largest. Filipino migrant workers were usually employed by the Jews, and stayed in the country with a work visa. The Filipinos, forming a large migrant workers group, had already become a part of Israel’s scenery. The prevalence of Filipinos working as live-in caregivers in Israel had even made the term Filipinit acquired the meaning of live-in caregiver in Israel’s context. The Filipinos in Israel received a minimum salary of USD 1000 for their work as live-in caregivers. They had a day off per week, in which they would engage in different kinds of activities.

Babis used various methods in conducting the research, including observations, interviews, and digital ethnography. She mentioned that there were different categories of beauty contest organized for women, men, girls and boys within the Filipino community in Israel. These events were usually sponsored by organizations like caregiver agencies and money transfer companies. Facebook was used as a promotion channel to call for participants for the events. The candidates, after registering for the contest, would have photo shoots, followed by two to five weeks’ rehearsals for the contest. The coronation ceremony did not mark an end to the beauty contest—the recap on the event and the photos taken at the competition would be widely shared on Facebook, and the money raised in the competition could become a source of support for other projects in both Israel and the Philippines.

Babis concluded that although beauty contest had negative connotations in the western context, it had acquired rich socio-cultural meanings in the Filipino community in Israel.
0 comments

The Multiculturalism in Action (MIA) Project is continuing its community outreach program, FUN with Interculturalism, in this academic year. On 30 September 2016, the MIA was invited to host intercultural activities for the Experiential Learning Day at Valtorta College. 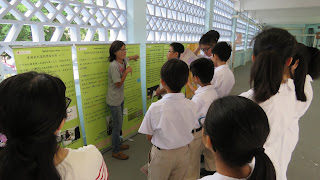 Aside from learning the facts on the history and contribution of South Asians in Hong Kong, students were shown how to play cricket, a popular sport all over South Asia.

There were also kabaddi sessions held by our instructors, Dr. Wyman Tang and Mr. Alan Tse. Kabaddi is a traditional game played throughout South Asia which develops the physique, team work, and strategy. Today, kabaddi is an official event in the Asian Games. Both students and teachers enjoyed a lot. 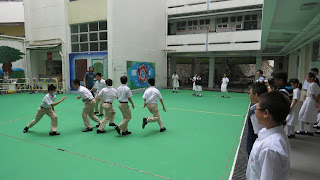 It was a fun and meaningful morning for students, teachers, and the MIA team, during which intercultural knowledge and activities were shared and discussed!
1 comments

[Upcoming Seminar] Children of the Emir: Citizenship, Family, and Migration in the Gulf


Title: Children of the Emir: Citizenship, Family, and Migration in the Gulf

The United Arab Emirates (UAE) and Kuwait are amongst the largest migrant receiving countries in the world. But while these Gulf states are heavily reliant on migrant labor, they are hesitant to offer citizenship rights and protections to migrants, even those who have been born within their borders. In this presentation I draw on ethnographic field work with migrant mothers and stateless children to show how national and transnational policies hinder the lives of stateless migrants. The kefala system, a guest worker program, mandates that female workers not engage in sexual relations for the duration of their contracts. While some engage in consensual relations with boyfriends or partners, others are raped by abusive employers. When they become pregnant, it is a visible marker that they have violated both the kefala contours requiring contractual sterilization and sharia laws about sex outside of marriage. Migrant women are then incarcerated; they give birth in jail, stand trial for their crimes and are often deported back to their sending countries – without their babies.

Pardis Mahdavi, PhD is Associate Professor and Chair of Anthropology and Director of the Pacific Basin Institute at Pomona College. Her research interests include gendered labor, migration, sexuality, human rights, youth culture, transnational feminism and public health in the context of changing global and political structures. She has written four books: Passionate Uprisings: Iran’s Sexual Revolution (2008) Gridlock: Labor, Migration and ‘Human Trafficking’ in Dubai (2011), From Trafficking to Terror: Constructing a Global Social Problem was (2013) and Crossing the Gulf: Love and Family in Migrant Lives (2016). 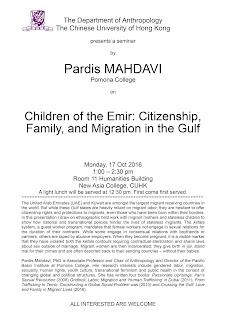 [Upcoming Seminar] Made to Measure: Understanding Crafting Revival in a Melanesian Society


Title: Made to Measure: Understanding Crafting Revival in a Melanesian Society

Graeme Were is Associate Professor in Anthropology and Museum Studies and convenes the Museum Studies postgraduate programme in the School of Social Science at the University of Queensland. He has held positions at University College London, Goldsmiths College London, and the British Museum and joined UQ in 2011. His research interests include museum anthropology, digital heritage and material culture studies and he has a regional specialism in Papua New Guinea. His recent work includes Lines that connect: rethinking pattern and mind in the Pacific (University of Hawai'i Press, 2010) and (co-edited with J.C.H. King) Extreme collecting (Berghahn, 2012). He presented the prestigious 2011 Curl Lecture at the British Museum awarded by the Royal Anthropological Institute, and in 2012, he received a UQ Foundation Research Excellence Award for his work on digital heritage and knowledge networks in Melanesia. He serves on the Australian government's National Cultural Heritage Committee. 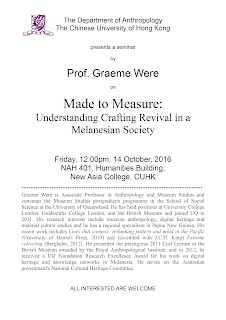 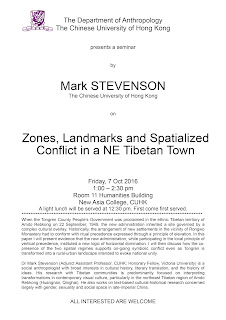 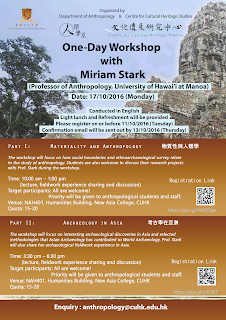 Part I: Materiality and Anthropology 物質性與人類學

Content/theme:
1. Discuss how social boundaries and ethnoarchaeological survey relates to the study of anthropology
2. Discuss how archaeologists conduct and then apply findings from actualistic research
3. Discuss the relationship between cultural anthropological theory and archaeological practice
4. Students discuss their research projects and Prof. Stark gives feedbacks

＊ Light lunch and refreshment will be provided.
＊ Confirmation email will be sent out by 13/10/2016 (Thurs).
0 comments