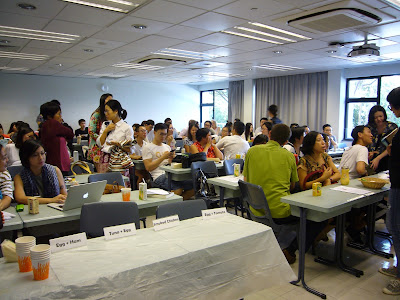 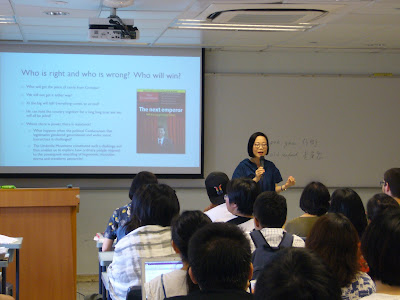 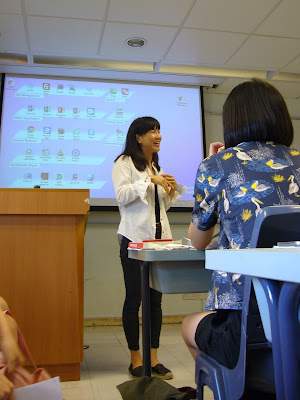 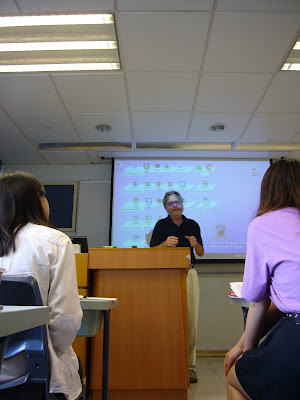 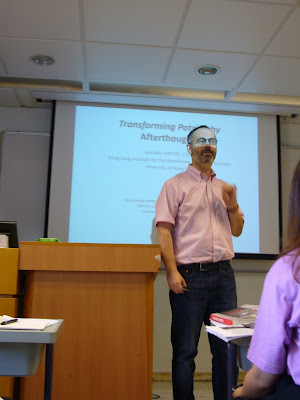 The ICONIC Mums Program had its sixth workshop “Community Development: Neighborhood Programs Workshop” on 19 August 2017. We visited St. James Settlement in Wan Chai to learn about how the Community Oriented Mutual Economy (COME) has connected and empowered the Wan Chai neighborhood, as well as to brainstorm what we can do for our community project that will kick start after the workshop.
轉眼間ICONIC媽媽課程的工作坊系列已經來到第六次了！在2017年8月19日舉行的 “社區發展：鄰舍計劃工作坊” ，旨在了解聖雅各福群會於灣仔推行的社區經濟互助計劃，認識此項計劃如何連結起並賦權予街坊，也讓我們思考想為自己的社區舉行一個怎樣的社區項目。

The workshop started off with learning how to greet each other in different languages which showed the uniqueness of being an intercultural program. We had a revision on how to greet in Hindi: putting our hands together and say “namaste”. Then, a Pakistani mum taught us how to greet Muslims: by saying “assalamu alaykum”, meaning “may God keep you save”.  The sounds of greetings kept warming us up as we practiced “cho sun” (meaning “good morning” in Cantonese) and “ni hao” (meaning “hello” in Putonghua). After the practice, we are all able to greet in various languages!
作為一個跨文化的課程，我們在工作坊開始前先學習如何以不同語言打招呼。首先，我們重溫了如何用印度語打招呼 - 雙手合十說 “Namaste”。然後，其中一位巴基斯坦裔媽媽教我們說 “Assalamu alaykum”，這是穆斯林的問候語，意思為 “祝你平安”。隨後，我們又學了用廣東話說 “早晨”，以及用普通話說 “早上好”。重溫幾次以後，大家都能以幾種語言與朋友打招呼了! 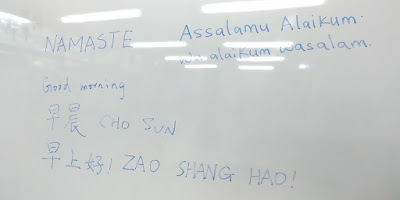 Do you know all these greetings?
你認識白板上的招呼語嗎？

Ms. Dora Cheng, a social worker of St. James Settlement, told us that COME has been launched for almost 20 years. Although Hong Kong has faced various economic downturns since 1997, difficulties also created opportunities. Residents in Wan Chai realized the importance of mutual support and community connectedness. COME is formed by residents from all walks of life, who are eager to contribute and participate actively, and as a result various project teams and social enterprises have been established. In addition, the “Time Coupon” system has been introduced. It pioneers the concept of exchanging goods and services by labor hours instead of cash.
接著，聖雅各福群會社工鄭淑貞姑娘為我們介紹COME。不說不知，原來COME已經在灣仔推行了接近二十年。雖然香港自1997年起經歷了不少風雨，但有危也有機，街坊慢慢明白到社區支援與連結的重要性。COME聚集到一班有心的街坊一起參與發展，規模越來越大，現在已成立了不同小組與社會企業。社區貨幣 “時分劵” 也是COME的一部分，不論你從事哪樣職業，勞動的時間都可以換來同等價值。時分券可以於COME的社區組織換取貨品或服務，真正做到 ”勞動有價”。

We were divided into two groups for a community tour to the Ground Works and the Time Coupon Place guided by Dora and a resident Sau Ping. The Ground Works is a social enterprise managed by Wan Chai residents. They sell local organic vegetables, as well as home recipe products such as the Five Elements Radish Cake. The Time Coupon Place is a place where residents can use time coupons to exchange for goods and services. It is also a gathering point for neighbors to stay for a chat and a cup of tea. The strong community bond in Wan Chai was reflected when Dora and Sau Ping kept greeting other residents in the community tour.
接著，我們分組隨鄭姑娘和街坊秀萍參觀土作坊和時分天地。土作坊是一所由街坊共同管理的社會企業，除了售賣本地有機蔬菜，也有自家研發的健康食品如五行蘿蔔糕。而時分天地除了是個可以用時分劵寄賣換取物品的地方，也是街坊的聚腳地。鄭姑娘和秀萍一邊於灣仔街道遊走，一邊與街坊打招呼，可見這個社區的深厚連結以及濃厚的人情味。 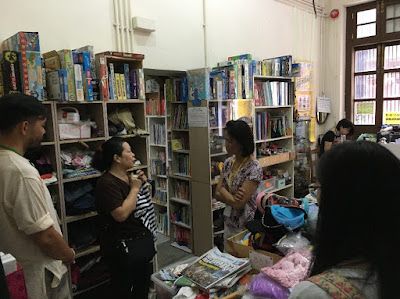 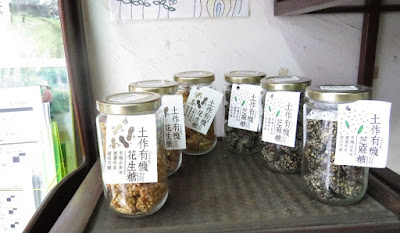 
Back at the St. James Settlement Building, Sau Ping taught us how to use orange peel, sugar, and water to make garbage enzyme. This product is a multipurpose cleaner which is environmentally friendly. We learned that it is most important to get the precise proportion of the ingredients, and be patient in waiting for the completion of fermentation, which takes three months. All of us are now looking forward to the completion of own handmade garbage enzyme, and we are eager to share the new skills with our friends.
回到聖雅各福群會大樓，秀萍教我們製作利用橙皮、糖和水製作環保酵素。環保酵素是多用途的天然清潔劑。我們學會的秘訣是：把握好各種材料的分量，並耐心等候需時三個月的發酵過程。大家都非常期待親手製作的成品，亦熱切希望與其他朋友分享製作環保酵素的心得。 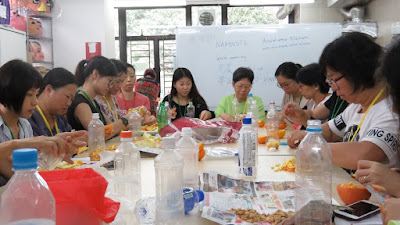 The workshop ended with an organic vegetarian lunch prepared by Wan Chai residents. Apart from guiding us to taste the freshness and different tastes of the natural ingredients, Dora explained to us the stories behind these ingredients and dishes. By knowing more about the production process, it seemed that we, as consumers, were reconnected to the land and producers.
工作坊以一頓有灣仔街坊為我們準備的豐富有機素餐作結。除了引導我們品嘗有機食材的鮮味，鄭姑娘亦向我們解釋每款菜色背後的生產故事。透過對這些人和事的了解，作為消費者的我們也仿佛與土地和生產者重新連接起來。 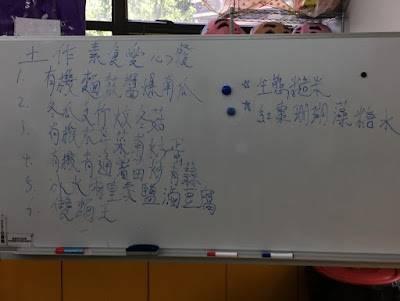 We were really inspired by the efforts and perseverance of the Wan Chai residents. All of us can’t wait to give a try on our own community project. The ICONIC mums started to design their projects, and everyone is looking forward to seeing each other’s achievement in the closing ceremony in November!


Touching Angkor: From Temples to Cities, Archaeology and Cultural Heritage in Cambodia

This summer, the anthropology department from The Chinese University of Hong Kong (CUHK) established the first credit-bearing course that included fieldwork in archaeology and cultural heritage studies in Cambodia. With our students from CUHK and graduates from The Royal University of Fine Arts (RUFA), Phnom Penh, we travelled to the capital Phnom Penh then to Angkor, Siem Reap in June. To share the result of our research, we have organized an exhibition at Hui Gallery, New Asia College, CUHK, 16-27, October, co-organized with APSARA Authority, Siem Reap and Faculty of Archaeology, RUFA, Phnom Penh, Cambodia.

We visited a piece of history left by the Khmer Rouge through the Tuol Sleng Genocide Museum that was listed under “the Memory of the World” in 2009; we examined the archaeological sites of Angkor, which the UNESCO inscribed as “World Heritage” in 1992. The class was divided into five groups that conquered the academic areas of museum anthropology, archaeology, ceramic studies, intangible cultural heritage and peoples and cultures of Cambodia. We will unravel some new and interesting cross-cultural interpretations of archaeology and cultural heritage studies in Cambodia in this exhibition.

Refreshment will be provided in the opening ceremony. All are welcome! 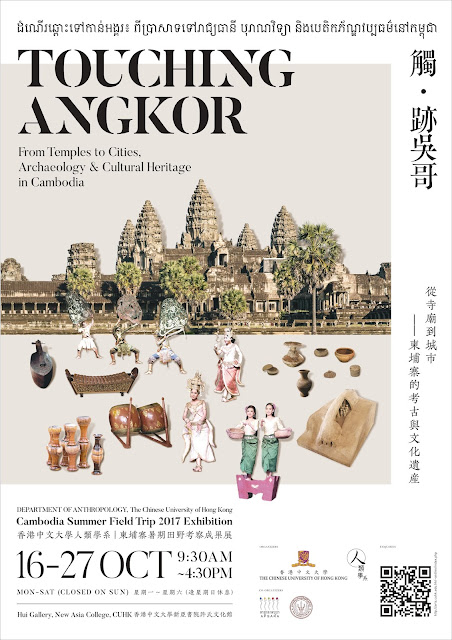