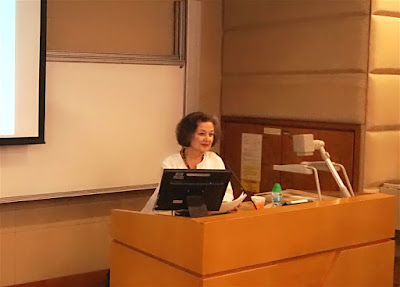 Potters at work today in rural villages of Thailand, Laos, Cambodia, Vietnam, Malaysia, and southern Yunnan province, PRC, make earthenware or stoneware for local and regional markets. Although under pressure from various social and material changes, these two basic types of ceramics still play important roles in local food preparation, and storage and in religious rituals. The technologies associated with their production reveal cultural continuities and boundaries that are obscured by the commonplace classifications of populations on the basis of language, ethnicity, or modern nationality. Ms. Louise Cort shared the summarized result of a long-term research project about village based pottery production in mainland Southeast Asia that took place between 1989 and 2010. It is a collaborated field research with Dr. Leedom Lefferts that visited more than two hundred communities, looking for distinctive patterns of productions in these villages.

According to Ms. Cort, there are few historical documents in mainland Southeast Asia. Most of the information about the production is from excavations in Indonesia, Philippines or from shipwrecks in particular.  However, there is a big gap in understanding why in the past ceramics were made in various part in Southeast Asia. How it is organized beyond the scale of village production?  How these ceramics come to be made? There are no written documents for how indigenous produce or how these ceramics are revalued by their makers and users. Therefore, Ms. Cort conducted this long-term field research by witnessing methods of pottery production to fill evidence in the gap. What method did she use to conduct the research?

‘Just sit down and let things happen,' she stated. She visited communities where potteries are still being made and conducted informal interviews with the villages to understand practical everyday use of this village-based produced pottery and for its local or regional distribution. Through close observation and videotape recording of potters at work, two fundamental patterns of production technology for stoneware and seven patterns for earthenware were identified. Ms. Cort emphasized the importance of not to edit the video or select a specific part of the production process. Instead, the researchers documented the whole process of the ceramics production process. Why is this so important? One big discovery in the research is that there is a variety of way to make earthenware pot that looks the same when they finish. By observing the whole process of pottery production, there are various ways to make pottery. Even the product may look the same in the end, their beginning can be very different. The project identified 6 types of different ways in making earthenware pottery, naming from A to F. Ms. Cort selected on type A, B and C to explain their patterns and distributions. Type C is special because it used a way that is similar to make stoneware potter at the very beginning. Therefore, it is key to understand the production by seeing it from the beginning to the end. 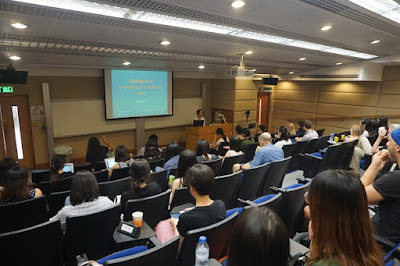 Through her past experience and study in Japan and India, Ms. Cort suggested that earthenware and stoneware ceramics usually do not exist together in a community. One will usually take dominate role and the other disappear. It is special in Southeast Asia that two different kinds of ceramics exist in same time and same place in the community and the market. They are also related to one another. Production of potters is regarded as one of the means to earn money. There is a seasonal variation which most people produced potters in the dry season when there is little or no rain for farming. Some people will choose to join the work team to overseas instead of producing ceramics.

Earthenware production is the work of women in Ms. Cort’s study. It is used to store water or for cooking purpose. One special thing about it is that people will place it near the main road of the village which anyone walk pass can drink the water. This ritual still exists even in large and modern cities in the region that pottery will be placed at the door as decoration. Different shapes of potters are made to suit different cooking needs, for instance, the pot for steaming rice is different from those for steaming medicine.

Indigenous stoneware production of mainland Southeast Asia is located at the interior (Thai) and coastal (Vietnamese).  Historically, two different patterns of stoneware technologies were found in the region that is not defined by a modern national border. Stoneware is the work of men in many parts of the region, especially Northeast Thailand and Laos. In contrast, no men make pottery in Vietnamese. As high temperature is required in the production, people will use a kiln shared by the community in a rotation.  People usually work as a team, one as the shaper and the other as the spinner. It has a different role in storage. It is used to store rainwater in dry seasons, rice, textile, alcohol and so on. Some are for guest use only. Ms. Cort mentioned an interesting battle between the host and the guest. A larger potter of drinking water with long straw will be provided to the guest. The host will keep adding water into the potter while the guest is drinking. The one who stops first will lose the game. The shape of jars is designed for specific, practical use. Each of them has a distinctive role in households that cannot be replaced.