[Friday Seminar Recap] Family Runs in the Vessels, Vines Run Through the Family: An Anthropologist Engages with Systemic Therapy 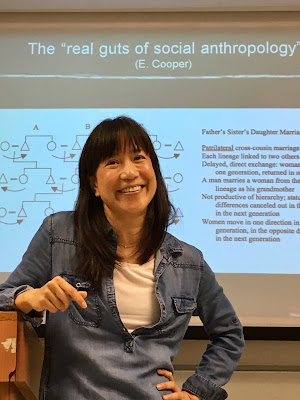 In this Friday Seminar, Dr. Kuan started by introducing the background of her paper. Firstly, kinship was once considered the “real guts of social anthropology”, and is a field of study recently invigorated by Marshall Sahlins’ new book, What Kinship Is--And Is Not. In this book, Sahlins defines kinship as “the mutuality of being”, and kinship, as Dr. Kuan points out, is about not only relationships but also how people construct their realities, especially the boundaries between the self and the other. While modern people are taught that the self ends at the surface of the skin, this is not how most of us experience actual life. Kin, as Sahlins puts it, “are people who live each other’s lives and die each other’s deaths”.

Secondly, in recently years, China anthropologists are discussing a “psycho-boom”, as a new, private sector of mental health services has been growing in China. Dr. Kuan did fieldwork in a research institute established in 2014 for family research and family therapy in Shanghai. The institute is embedded in a private wellness company founded by an overseas Chinese businessman. A lot of money was poured into the facilities, in order to train new therapists. Well-established professionals from the state sector act as mentors, and the trainees are mostly middle-aged women who have gone into counseling as a second career. The families seen at this field-site tend to be middle-class but this is not always the case. They usually come with a teenager that has been either hospitalized and/or medicated with no signs of improvement.

Dr. Kuan then detailed a case in which the therapeutic process illustrated a problematic transpersonal distribution of resentment and responsibility. The “identified patient” was a teenage girl on anti-depressants, and her parents divorced several years ago yet still got into fights. As the psychiatrist and therapist, whom Dr. Kuan calls Dr. K, analyzed it, with evidence from biofeedback data, the daughter has put herself in her mother’s position, feeling her feelings for her, just as the mother had put herself in her daughter’s position, reading the father’s every “attack” on their daughter as a personal attack on her. This sort of confusion of selves and run of emotions was called “entanglement”, which, as Dr. K believe it, is poisonous rather than nourishing: The girl admitted that she found it increasingly hard to handle schoolwork, and the burden she felt made her want to collapse. Dr. K commented, “Putting too much energy here, things won’t be so smooth in the outside world.”

The purpose of therapy at the Institute, therefore, is “individuation” or “differentiation”. According to Murray Bowen, one of the founders of family therapy, differentiation refers to the degree to which a person is able to remain “objective” even while engaged in ongoing human intercourse. Anxiety determines differentiation. Relationship-oriented, poorly differentiated people put too much “life energy” into seeking “love and approval”. Highly differentiated people, on the other hand, are “more contained”, more “self-determined” and “goal-oriented”. While Dr. Kuan clearly points out Bowen’s idealization of objectivity and rationality, she maintains what this theory highlights is an existential, ethical problem – i.e. the question of how to conduct oneself in one’s relations with others, particularly kin.

In the case described above, Dr. K contended that everyone is trying to control everyone else has confused proper roles and positions, leading to everybody’s shared pain. Dr. Kuan argues that the work that Dr. K does is moral in essence, as the protocol works on human relationships. This kind of family systems therapy exposes and tackles all the grudges and hurts that are either too sensitive or too banal to recognize, let alone address in the course of everyday life. And it is not only about feelings and emotions; the taking of responsibility that is not one’s to take is also consequential in a situation of suffering. Family therapy, as Dr. Kuan sees it, offers one possible (though hardly perfect) response. In conclusion, Dr. Kuan argued that we should pay attention to the difference between individuation and individualization, and avoid reducing everything to the framework of neoliberal governmentality.