One-Day Workshop with Miriam Stark
Part I: Materiality, the Social Lives of Things, and Kalinga Ethnoarchaeology

On October 17, the Anthropology Department invited Prof. Miriam Stark from the University of Hawaii to give two workshops to CUHK students. In the first part of the workshop, Prof. Stark talked about “Materiality, the Social Lives of Things, and Kalinga Ethnoarchaeology”.

Prof. Stark’s talk was largely based on her ethnographic dissertation and fieldwork done in the Philippines mainly in the 80’s and 90’s. She began her talk by providing participants a short introduction and background information on women potters who resided in a village known as Dalupa, on the Upper Pasil Basin in the Phillippines. Her admiration and respect for these women were strongly conveyed when she mentioned all the names of the women shown in her presentation.

She provided us with an overview of the history of “Americanist” / “Euro-Americanist” approaches in terms of conceptual framework in archaeology and how these approaches / paradigms have shaped our thinking regarding materiality. Since the foundation of Americanist archaeology was initially based on ethnology and anthropology, in earlier times it was believed that humans and objects were intrinsically entwined with each other. This correlation was believed by the German-American anthropologist Frans Boaz (1858-1942)—the founding father of anthropology.

In fact, early American studies regarding the study of objects intensely focused on culture history and social anthropology. One of Boaz’s PhD students, Alfred Kroeber (1876-1960), an American cultural anthropologist from the University of Columbia, had created a diagram to map time and space variations by placing the same types of objects to mirror the chronological sequence. These diagrams are still very important foundations for current archaeologists and anthropologists to document linear sequences of objects in their studies.

From the 60’s and 70’s onwards, archaeologists no longer followed the culture history approaches and a new era of approaching materiality had emerged. Known as “Processual” or “New Archaeology”, prominent archaeologists of this “movement” were American archaeologist Lewis Binford (1931-2011) and British archaeologist Colin Renfrew (b. 1937). However, epistemological tensions arose when it came to accepting materiality being an indisputable part of archaeology. Conflicts occurred between archaeologists who were against materiality and those who accepted it. Those who opposed thought that this notion was deemed too humanistic, hermeneutic and phenomenological; it didn’t fit into their own definition of “science”, where empirical data and evidences were the only valid forms of methodology. Prof. Stark clearly had her own view when it came to the notion of materiality. She emphasized that archaeologists are materialists themselves and focus on work about historical materialism, Marxist’s notions of organization, production and change etc.

Though the majority of archaeologists were concerned with style, they believed they should accept notions of materiality. They believed that they should start with style in order to study function, context and process. However, the “hyper-social science” people argued that studying style alone was not scientific enough, instead they should engage themselves with function; and the two should be separated. This whole notion/study is also known as “New Materialism” or “Evolutionary Archaeology”. But Prof. Stark believed that function and style should be studied together, especially when it came to the study of pottery.

There are mainly two kinds of approaches to deal with materiality in contemporary archaeology: artefact biography as social history, and artefact biography as use-life. The former is based on Kopytoff’s essay on the cultural biography of objects: commoditization as process, as written in The Social Lives of Things (edited by Appadurai in 1986). Kopytoff believed that objects are divided into animate and inanimate objects. Objects with animosity contain agency, potency, which, for example can be seen in a Buddhist ceremony, by, for instance, dressing a Buddhist statute as if it is alive. Inanimate objects, on the other hand, are on the receiving end of the “animosity spectrum”. The belief in animosity in objects are respected and taken into consideration by anthropological archaeologists who focus on the Southeast Asia region in particular. Though many other archaeologists are dealing with less-animate (dead) objects, the study on “style” is still important to questions related to social boundaries, mobility, the production, maintenance, co-residence, interactions, imperialisms of various artefacts based heavily on style as a social process etc.

Using this approach can be problematic though when it comes to the study of tribal cultures and their material culture. Prof. Stark drew participants’ attention to her Kalinga project and argued why an ethnoarchaeology is a more suitable approach when we deal with tribal people and their objects. The Kalinga Ethnoarchaeoloical Project in the Philippines, founded in 1973 by William Longacre, who (together with Lewis Binford) believed that local people and the natives were neglected in the studies done by cultural historians. Longacre believed that he could trace the patterns of post-marital residence based on clusters of very similar ceramic styles (i.e. ceramic style variability). This could reflect the tradition and skills that was passed on by mothers or aunts to (newly-wed) women. 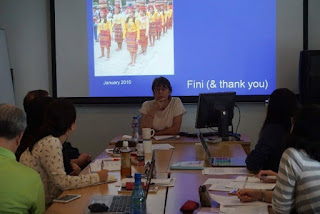 A case study that Prof. Stark discussed in detail was Dalupa, a village on the mountains of the Upper Pasil Basin. She mainly studied the ceramic change (primarily focused on utilitarian wares) in Dalupa and another village throughout the 20th century. Prof. Stark explained that the women potters were poor and desperately needed more income. In order to expand their current markets, these women potters had to become more innovative by, for example, making candlestick holders and goblets. She also noted that ceramics in different parts of the river valleys looked different despite they were serving for similar functions.

She then proceeded to show the importance of style, by pointing out that exquisite designs known as tinoktoks could be found everywhere such as blankets, ceramics and tattoo’s on females. She also mentioned that it was difficult to ignore the notion of style since these patterns were related to how the women made the potteries and were reflected in their vessel forms. This brought us back to her earlier statement that style and function should be studied together.

And this all came back to the notion of artefact biography as use-life. People might no longer think about patterns, but these were basically "encoded" in the potteries. Though the manufacturing process of ceramics seemed to be mechanic, the actual process was institutionalized and was different for every production group.

Prof. Stark concluded the workshop by saying that the uniqueness of ceramics did not only depend on the manufacturing process, style and function, but also on how these ceramics were being used and justified in public spaces through dances, which defended and re-enforced a village’s social boundaries, so that everyone knew where they came from.