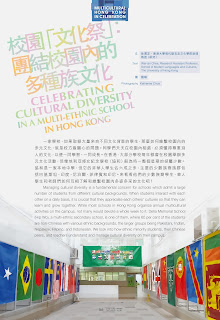 "It was a time of togetherness. We could invite anyone to dance whatever dance. Everyone might be dancing different dances, but we were all enjoying the moment together"
—Wai-chi Chee


Extract from the article:

While most schools in Hong Kong organize annual multicultural activities on the campus, not many would devote a whole week to it. Delia Memorial School (Hip Wo), a multi-ethnic secondary school, is one of them, where 60 per cent of the students are non-Chinese with various ethnic backgrounds, the larger groups being Pakistani, Indian, Nepalese, Filipino, and Indonesian.

While diversity was celebrated in this Multicultural Week, what stood out was not only diversity, but more deeply, “unity in diversity.” For all the activities, students formed themselves into teams that comprised members of diff erent backgrounds. For instance, dodge ball competition had teammates of junior and senior students, boys and girls, Chinese and non-Chinese speakers. For face painting, Chinese and non-Chinese students painted half of each other’s faces. Students could either paint the remaining half themselves or have someone else to paint it. Diversity was celebrated but the task could only be accomplished by collaboration of all team members, and as such, “unity in diversity”.