The Virtual Museum at the Department of Anthropology, CUHK, offers the public a digital exhibition of ethnographic collections and archaeological artifacts collected by the teachers and students of the Department over the last three decades. Theme of current exhibition is "The Anthropological Meanings of Toys". 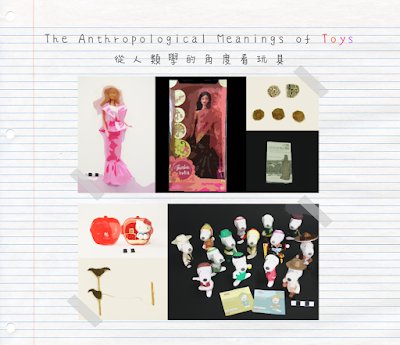 Toys are commonly regarded as objects for children to play with, which help children to explore their relationships with the world, and train them in the skills they need as they grow up. To anthropologists, toys also carry rich cultural meanings. Toys reflect the perceptions of different societies on the nature of childhood and play―a perception about how children’s nature can be cultured. (Schwartzman 1978:9) They also reveal the economic, sociocultural, and technological transformations that a society has gone through. (Schwartzman 1978:9)

The variety of toys is large and highly diversified, ranging from miniatures of objects commonly seen in daily life (e.g. toy train), to distorted or imaginative ones beyond everyday experience (e.g. monster figures). (Sutton-Smith 1986:248,252) Many toys convey gender values, such as kitchen sets and dolls aimed at girls, while toy cars and guns are meant for boys. These toys socialize children of different sexes to behave and grow up in accordance with the gender expectations of society.

The possession of toys is related to ideas of consumption. They teach children meanings of buying and selling, and help them to learn “the materialistic culture habits”. (Sutton-Smith 1986:2) In fact toys are not only consumed by children, but also by adults. Toys, in adult’s collections, may acquire a different set of meanings. They may be collected for the purpose of investment or speculation, or for a nostalgic feeling that enables the owner to reconnect with the past through toys with the same leitmotif. (Bosco 2001:266; McVeigh 2000:225)

Under globalization, toys may be deterritorialized and reterritorialized, during which some original features of the toys are kept and new cultural elements are incorporated. This is done to promote the product in the new market, but simultaneously it may lead to challenges or integration of cultural meanings from the originating and the receiving societies.

The symbolic values and representations carried by toys are meaningful not only to the players themselves, but also to their societies and to anthropologists. As Sutton-Smith argued, “Toys, apparently the most minimal of our concerns, turn out to be intimately related to many larger cultural patterns in the family, technology, schools, and the marketplace.” (1986:253)