The study of the beginning of food production in prehistoric China has been dominated by the approach of searching for a single mark of the “origin” of agriculture, leading to infinite debates on many issues. A more reasonable and productive way to understand the economic pattern of this critical period is the level of food production. The concept of “Low-Level Food Production” offers a useful alternative perspective to investigate the economic changes as well as the population dynamics in early Neolithic China.

Dr. Tianlong Jiao is the Curator of Asian Art at the Denver Art Museum, USA. He is also an Affiliate Graduate Faculty at the University of Hawaii at Manoa, an Adjunct Chair Professor at Xiamen University and the Chinese University of Science and Technology. He received his Ph. D from Harvard University in 2003. He was the Head of Chinese Art Department at the Asian Art Museum of San Francisco from 2014-2015, Chief Curator of Hong Kong Maritime Museum from 2013-2014, the Chairman of the Department of Anthropology at Bishop Museum from 2006-2013. He also served as the Director of Shandong Archaeology Team in the Institute of Archaeology at Chinese Academy of Social Sciences. His research specialty is Chinese and Pacific archaeology and museum studies. He has conducted archaeological projects in mainland China, Hong Kong, Taiwan, Hawaii and central America. He also curated many museum exhibitions. His publications have explored a variety of issues including early food production, the Austronesian expansions, formation of states, ancient environment, archaeology of gender and style, maritime adaptation and maritime trade. He has authored/co-authored six books and more than eighty research papers both in Chinese and in English. His English book The Neolithic of Southeast China (Cambria Press 2007) was the winner of the 2007 Philip and Eugenia Cho Award for Outstanding Scholarship in Asian Studies.

Free admission. All interested are welcome. Please register on or before 8 June 2016 by filling the form: http://www.cuhk.edu.hk/ant/cchstalk2016.htm. 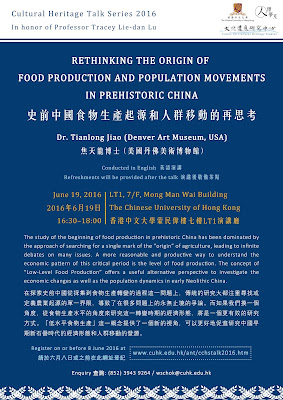