[Upcoming Seminar] Airborne Schizophrenia: On the Dual Identity of Air Pollution in China


Airborne Schizophrenia: On the Dual Identity of Air Pollution in China

The global concern with climate change is often related to one aspect of air pollution described as greenhouse gases. However, in China, climate change is not considered as important as another aspect of air pollution called smog (霧霾), which has become a problem for China primarily because of airborne particulate matter. Although both greenhouse gases and smog are related to air pollution, this talk attempts to address why Chinese society has only stressed the importance of smog. One explanation is related to a previous discourse within the Chinese media and the environmental policy choices of the Central Government which kept these two issues separate. However, the spread of such a discourse by the media and government has formed in a dialectal reaction to the social perceptions and cultural interpretations of air pollution. This talk argues that it is the perception of smog as being socially “near” which allows the discourse to resonate with the Chinese populace in a way that clearly takes precedence over a concern with climate change which for most is perceived as being socially “far”. 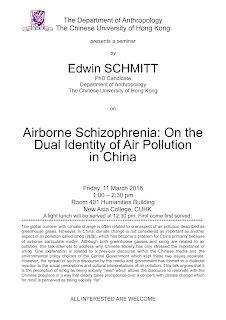