The large number of migrant traders from the Islamic world to China are responsible for a major part of China’s exports. They are facilitated by thousands Muslim interpreters between Arabic and Chinese in major trading cities like Guangzhou and Yiwu. Most of the interpreters came from the countryside or small cities in the northwest, had an education level of junior high school or below. Many attended masjid/madrasas affiliated with Mosques or privately-run Arabic language schools. Apart from bridging the language gap, they also shoulder considerable financial risks: some of them would have to compensate the Chinese suppliers if the foreign clients fail to pay in the end. The slowdown of the global economy and the political instability in the Middle East since 2011 rendered their position particularly vulnerable. Based on field research in Zhejiang and Guangdong, this talk examines how the translators perceive their roles in international trade and national development, and their sense of hope and identity. 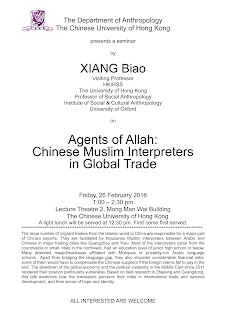