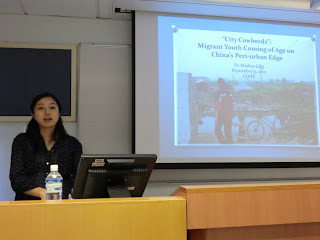 In 2010, there were more than 21 million second-generation internal migrants in China. One out of three children in Shanghai does not have a city hukou (household registration). Based on 24 months of ethnographic fieldwork, Dr. Ling’s vivid presentation explores how school-age migrant youth in Shanghai oscillate between the “rural” and the “urban”—hence the title “city cowherds”. Ling’s research paints a nuanced picture of these city cowherds—that are not merely victims of the discriminatory social structure, but persons in a state of “in-betweenness” with aspiration.


The migrant youth in Ling’s study cluster in the peri-urban edge of Shanghai where living condition is poor; the more well-to-do ones often rent an apartment together with other migrant families in sub-urban gated neighborhoods. Typically, they came with their parents from their rural hometown to Shanghai since a young age, and have never gone back. Growing up in Shanghai, they all speak fluent Putonghua in public places. Most of them understand some Shanghai dialect, though few can speak it well; most of them cannot speak their hometown dialect very well either. Their parents are generally self-employed small entrepreneurs who, unlike migrants working as wage laborers, have more flexibility in their work and living condition. This enables them to bring their children to the city. 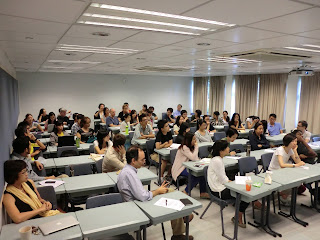 Without a city hukou, these migrant youth are denied access to many public provisions in the city. Some public schools segregate migrants and natives into separate teaching buildings. The Shanghai city government is clear about its intention to channel these migrant youth into the low-end manufacturing or service industry, thus reproducing the existing urban vs. rural social hierarchy. For example, the native-place-based college entrance exam (gaokao) rule forbids migrant students from taking the exam in Shanghai. This in effect creates a glass ceiling, as they cannot continue formal education in the city beyond grade nine. Therefore, many of them go for a three-year vocational schooling in Shanghai. Those studying in vocational schools are stigmatized as “bad students” and are routinely discriminated against in job placement. 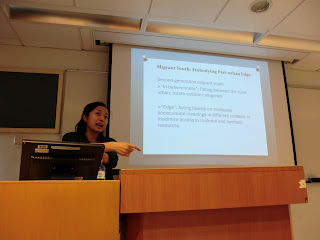 In response to the larger structure set against them, these migrant youth resisted passively. Some simply slack off in school. Many find a part time job after school.  With the money they earned, they—just like other youth growing up in the city—pursue youthful lifestyle through consumption activities, like dining out, window shopping, and wearing trendy clothes. These leisure activities may seem trivial, but Ling argues that through these activities the migrant youth learn the urban knowledge necessary to thrive in the city. They make friendship across the rural-urban boundary, which is uncommon for their first-generation migrant parents. Therefore, the migrant youth embody the “peri-urban edge”. Despite the stigma against them, they are not marginalized victims of the larger structure, but “city cowherds” falling in between the “edge” of the rural-urban categories who are able to act flexibly on “malleable socio-cultural meanings in different contexts to maximize access to material and symbolic resources”.


With great ethnographic depth, Ling’s research tells a vivid story of who the city cowherds are, what challenges they face, and how they respond to such challenges. It deepens our understanding of internal migrants in China and the problems of the hukou system.