"International Conference on Foodways and Heritage: A Perspective of Safeguarding Intangible Cultural Heritage" 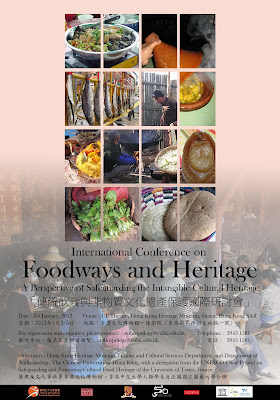 **************************
Foodways is considered an important cultural marker of identity in societies, and it has provided a medium for the understanding of social relations, family and kinship, class and consumption, gender ideology, cultural symbolism, etc. Nowadays, much scholarly attention has been on the socio-political construction of foodways; in particular, there is a growing interest in considering foodways an intangible heritage reflecting the significance of being part of people’s life in the era of globalization. With the understanding that some ingredients and culinary skills became more difficult to be inherited and sustained, the possibility of losing them should not be overlooked. Traditional cuisine has been mostly changed or even disappeared, and some culinary skills are known among a handful of people. So, are we going to witness the dying of traditional foodways? Or, are we going to keep it documented in the last minute because this is part of our general support of cultural diversity? This conference looks at the politics of foodways and heritage, and investigates how different kinds of food are produced, sustained and inherited while at the same time how they are preserved as intangible heritage for various reasons. We seek papers that examine what foodways is considered a kind of local/national heritage, why people think foodways can be heritage for preservation, and how it has been culturally invented, conceptualized, and marketed in various societies. We have presenters researching foodways in the context of heritage politics on local/regional levels, looking into issues such as transnational relations, globalization and localization, ecology and natural resources management, transformation of traditions and technical interventions etc. Lastly, this conference is interdisciplinary and we have scholars from different disciplines, such as anthropology, sociology, history, and gender studies.