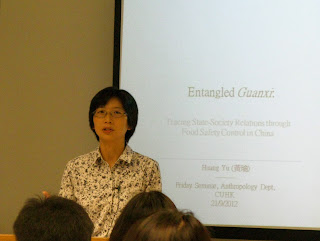 Food safety in China has been a concern in the international mass media for the past decade. Apart from rising fear among foreign countries about imported food from China, what has the food safety crisis brought to China internally? Dr. Huang Yu addressed this question in her detailed and informative talk on 21st September.

Dr. Huang began by pointing out that the food safety crisis originated from the treadmill effect caused by overproduction of Chinese farmers. In order to maintain such high-yield production, antibiotics were used at the price of food safety. It was not until the WTO imposed a ban on animal products from China that the Chinese state started to pay attention to this problem. Dr. Huang argued that the government adopted new discourses and practices regarding food safety in order to alleviate this problem. These transformations reflected that the governance of China had taken the neoliberal turn, which complicated state-society relations.

Dr. Huang illustrated how neoliberalism and marketization affected state-society relations in terms of food safety control with two cases. The first case examined a licensed fish veterinary training programme. In order to reduce the cost of the state, now only epidemic diseases are controlled by designated official veterinaries hired by the state, while regular diseases are left to certified veterinaries that are market subjects. It implies the changing role of the state from a caring father towards a market regulator. 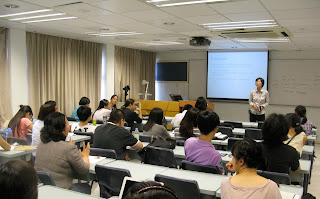 The other case that looked at a drug residue detection campaign, however, shows the complex guanxi between the state and the citizens. For example, the owners of shrimp hatcheries were usually informed of an upcoming inspection a day before through special guanxi with lower level officials; the higher level government officials would not be able to find the way to the shrimp hatchery without the guide of county officials. In this situation, county officials faced a dilemma: on the one hand,  they were more sympathetic and protective towards the local farmers, but on the other hand, they had no choice but to report them when the central government tightened restrictions.

To sum up, Dr. Huang’s talk directed our attention to how neoliberalism operates in China. The state-society relations have to be re-conceptualized as shown in the two case studies.