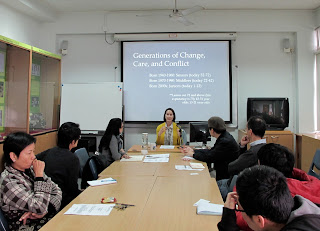 With the recent release of books such as Amy Chua’s Battle Hymn of the of the Tiger Mother and Pamela Druckerman’s Bringing up Bebe, parenting has once again become a popular topic in public discourse. These books cover the Chinese and French ways of parenting, respectively. It is with this background that the Anthropology Department invited Princeton PhD candidate, Erin Raffety, to give a talk about the intergenerational parenting discourses in relation to foster child care in China, specifically in Guangxi.

In her talk Raffety covers two generations of parents, the seniors (52-71 years old) and the middlers (22-41 years old). Rafferty unpacked the conflicting ideas of parenting between these two cohorts using ethnographic examples based on participant observation with foster families and her work with an orphanage. Rafferty found that foster parents in Guangxi tended to be seniors, while orphanage workers tended to be middlers, some of whom had children. The seniors would discipline their children through humiliation and (bluffed) threats such as telling the children that they would be taken back to the orphanage or that they were unwanted. The middlers said one should just ignore the children when they misbehaved and use positive techniques such as telling children how much they loved them at other times to encourage them. Rafferty noted that the former technique is the older more Chinese method of parenting that is predicated on a more confrontational discipline, while the latter is influenced by recent western models of positive parenting.

The conjecture over the effectiveness of different parenting methods is not only intergenerational, but intercultural. This was reflected in parts of the question and answer session. Some audience members noted that the positive parenting advocated in western societies led to spoilt children, as Chinese orphans were excessively doted on by families. The foster parents in Guangxi felt that telling the children that you love them would only lead them to be spoiled. Yet, there is also the question of the children’s feelings of abandonment. Raffety noted that this was matter of context. There are times when children should be disciplined and times when they should be loved and encouraged, and what is appropriate depends on the cultural context and expectations. Raffety’s talk shows how anthropology can successfully unpack different perspectives on issues such as parenting and analyse the conflicts between these perspectives. 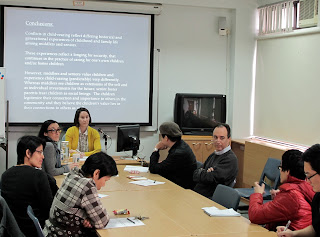