HKAS Highlight: Sailors on Container Ships in a Neoliberal Era 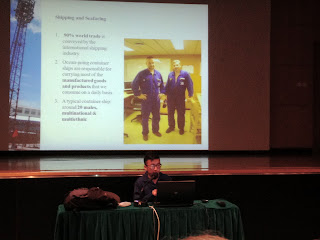 In an age where most anyone of means can obtain any sort of manufactured goods. Shipping remains the major mode of transport for goods across the world. In his talk, Sailors on Container Ships in a Neoliberal Era: "Breadwinners", "Guards" and Prisoners", Wu Liang covers the lives of sailors on container ships. Wu illustrated the hardships of life in the open sea from the isolation, to the physical strain as shipping companies continue to seek ways to minimise expenses and downsize. The goal of manning a ship at minimum cost often means that crew members are drawn from all over the developing world from Eastern Europe to East Asia. The result is a mish-mash of ethnicities on these polyglot crews. Comradery is often reduced to a formality due to cultural differences. Close friendships are difficult to form, as crew composition is constantly changing.

Wu’s most notable point is the irony that seafarers, who bring the fruits of globalisation, are denied some of globalisation’s greatest benefits like easier international communication and travel. While many of us receive news from loved ones from continents away at the click of a mouse, it takes low ranking seafarers days and sometimes weeks to receive the same news when they are at sea. Calling friends and family is rare, as the cost of satellite technology is expensive and mobile phone reception is nonexistent at sea. While, increasing travel afforded by cheaper airfares has allowed more and more people to see the world, seafarers are seeing less of it than ever before. Wu noted that seafarring has and still continues to be promoted as a career path for those seeking to see more of the world, yet seafarers are less able to see the world than in previous eras, as on shore leave has become increasingly limited due to shorter stops at ports as ports seek to maximise their efficiency in the neoliberal era.

Through his years of fieldwork, Wu Liang manages to use his study to give voice to the hardships faced by these unsung heroes of globalisation. In doing so he shows the importance and relevance of ethnographic studies in giving voice to those whose voices are not heard.


For more information please visit the Hong Kong Anthropologist to see a copy of Andrew’s research paper on which this talk was based.