[HKAS seminar] When the Sun Sets in the Land of the Rising Sun: Psychoanalytic Theory and Sexual Behavior in Japan

Title: When the Sun Sets in the Land of the Rising Sun: Psychoanalytic Theory and Sexual Behavior in Japan

Information on sex in Japan especially in the media is conflicting and contradictory. One image is sexualized with soaplands, enjo-kosai or compensated dating, and erotic manga; while another is of sexual repression. In 2008, Japan Today reported the lowest in frequency of weekly sex (34%) and sexual satisfaction (15%). The Guardian's Abigail Haworth in 2013 alarmingly claimed that young people in Japan have stopped having sex altogether, and Business Insider (2015) characterized Japan as experiencing “celebacy syndrome”. However, a BBC “Sex in Japan” documentary in 2008, and in 2015 a series of “special reports” on JK (Josei Culture or compensated dating with adolescent girls) by VICE News and reports in the Japan Times about “high school walking” say otherwise.

Mr. Gordon-Mizusawa provides an anthropological and psychological analysis of sexual behavior in Japan by examining over 10 years of ethnographic interview data collected by the speaker, focusing particularly on first sexual experiences and subsequent behavior. He also looks at how Western media and academia portray sexual behavior in Japan and explores the meaning of “virginity” as a culture-bound phenomenon. Audience members will also participate in interactive activities during the talk.

Jermaine R. Gordon-Mizusawa is a PhD candidate in the Department of Anthropology at The Chinese University of Hong Kong. His reseach interests include first-sexual experience and sexual behavior in Japan and East Asia using person-centered ethnography, psychoanalytic interview techniques and psychoanalytic theory. He is also interested in child and human development.

Following the talk, you are invited to a self-paying dinner with the speaker. For more information, please contact Stan Dyer on 9746 9537 or anthrohk@gmail.com, www.cuhk.edu.hk/ant/hkas, www.facebook.com/hkanthro. 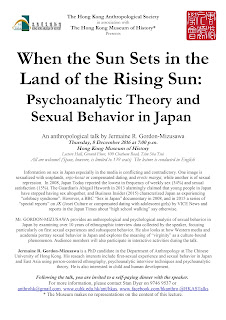