[HKAS Seminar] Urban Volunteers in Rural China: Imagining the Nation, Encountering the Other, Transforming the Self


In the past decade, a growing number of urban Chinese, primarily university students and graduates, have gone to rural and ethnic minority regions of Western China to act as volunteer teachers in schools, for periods ranging from a few days to a few years. Based on interviews, field research and media narratives of volunteers, this talk will propose an anthropological analysis of this form of volunteering as an Othering encounter in which cosmopolitan and rustic, urban and rural, Han and ethnic minority identities are highlighted and negotiated. This Othering encounter is a process that involves multiple stages, beginning before the volunteers’ departure, unfolding during the period of service in the remote locale, and continuing after the return to urban life. Through this process, concerns with effecting lasting educational change are eclipsed by the frustrations and joys of engaging with local people and their realities. Volunteering becomes an experience of self-reflection and individual transformation; at the same time, it becomes a ritual of solidarity that enacts the unity of the Nation, dramatizing and reconciling the divisions between its people.

Dr. David A. Palmer is an Associate Professor and head of the department of Sociology at the University of Hong Kong, which he joined in 2008. After completing his PhD in the Anthropology of Religion at the Institute for Advanced Research in Paris, he was the Eileen Barker Fellow in Religion and Contemporary Society at the London School of Economics and Political Science, and, from 2004 to 2008, director of the Hong Kong Centre of the French School of Asian Studies (Ecole Française d'Extrême-Orient), at the Institute for Chinese Studies at the Chinese University of Hong Kong. 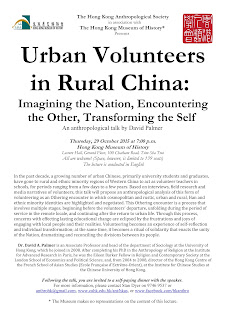